Sean Kelly Tour fever has certainly descended on Waterford in recent weeks and one cannot help but notice the multitudes of cyclists out on the roads preparing themselves for the challenge ahead! The Sean Kelly Tour of Waterford which is part of the An Post Series, an Irish Sports Council initiative, of five cycling events throughout Ireland in 2015, takes place on the roads of Waterford on Saturday and Sunday 22nd and 23rd August and is now in its ninth year.
Last few places for the Sunday routes –
There are still a few places available on the 50k Kelly Cruise, the 100k Kelly Heritage Route and the 160k Kelly Comeragh Challenge.- book now at www.theseankellytour.com

Families and younger cyclists gearing up for the 12k Kelly Spin!
If you have missed out on registering for Sunday’s event you can still be part of the action! On Saturday 22nd August the up and coming cyclists of the future will get their chance to get out and active on their bike in the company of 1500 others on a partially traffic free route around Dungarvan, Abbeyside, the Old Railway Line, Clonea Road and Ballinacourty in the 12k Kelly Spin. Open to all cyclists of 8 years and over, entry is just €2 and you may register on the day of the event in Walton Park and the Causeway Tennis Club from 10:30 a.m. Come early to enjoy the entertainment and soak up the atmosphere around Walton Park. This year there will be a food stalls and face painters to keep all ages entertained before and after the cycle. The cycle itself starts at 11:30 a.m. 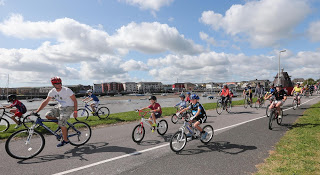 Sean Kelly Tour Participants to Support a Worthy Causes!
Each year since 2007 the event has had a nominated charity and this year is no different. The Irish Pilgrimage Trust is the nominated charity for 2015 and they are delighted to be part of the tour this year! Participants who wish to do so can request a sponsorship card or donate on the weekend of the event. The Trust will also have a fundraising raffle over the course of the tour weekend with a new Lapierre bike up for grabs for the lucky winner amongst other prizes!

The Irish Pilgrimage Trust is a 32 county charitable organisation caring for young people with special needs, regardless of creed or ethnic background. They care for more than 1,100 disadvantaged, ill, disabled or marginalised young people annually. Their guests receive week long holiday breaks in Ireland and France under the care of our teams of volunteer carers, nurses and doctors. Guest’s families and carers also benefit directly through respite breaks.  The Trust is run by a board of volunteer trustees who direct and manage the Trust through its administration head office in Kilcuan, Clarinbridge, County Galway. The Trust does not receive state or public funding and is totally reliant on fundraising and voluntary donations.