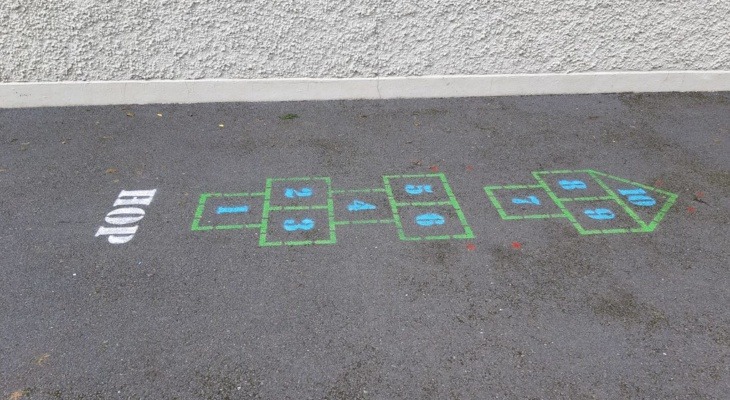 Playground markings are designed to promote a child’s enjoyment of and participation in physical activity during P.E time, lunch time and other break times during the school day. The markings are painted designs on the school/centre grounds using lines, shapes and patterns to encourage children to play, have fun and engage with other children.

Play and fun games are widely recognised as an essential part of a child’s early development, which is defined as up to the age of 5 years. There is significant evidence which highlights play and physical activity have a positive impact, effecting cognitive, physical, social and even emotional advancement from an early age. The focus of the Playground markings is to enhance the physical environment and provide playground designs that promote physical activity and play. Additionally, the markings are intended to appeal to teachers as well given that the markings lend themselves to reinforcing core academic content. The markings are designed to encourage teachers to incorporate activity breaks during the instructional day.

A stencil kit is available to schools across Waterford who wish to put down markings on their school yard. These Playground Markings promote movement through Mathematics, Activity Circuit, Hopscotch and a Maze and are suitable for children of all ages.

To organise a consultation and plan your Playground Markings, contact Louise Barry on 086 4650063/ lbarry@waterfordsportspartnership.ie