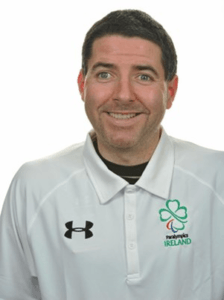 I’m Damien Vereker, a 37 years old Para-Cyclist. I live in Waterford City with my wife Jennifer and stepdaughter Alanna. I have a vision Impairment called Retinitis Pigmentosa (RP). I graduated from Waterford Institute of Technology in 2012 with a 2.1 Level 8 Honours Degree in Social Care.  I am a member of Comeragh Cycling Club in Waterford and a member of the Ireland High Performance Squad and competed at the 2016 Rio Paralympic Games.  I compete on a tandem (two seater) bike piloted by Dermot Radford from Tipperary Wheelers.

“RP is a hereditary degenerative eye disorder that affects the retina, which is the light sensitive tissue that lines the back of the eye. RP is a gradual and progressive eye disorder but it is rare for individuals to lose their sight completely.  Symptoms of RP include problems seeing in poor light, at night and loss of peripheral vision which is referred to as tunnel vision.  In some instances of RP central vision is lost which results in problems with reading print and doing detailed work. RP is a degenerative eye condition but the rate of deterioration is different for each individual person.

I was diagnosed with RP in 1997 when I was just 17 years old.  I realised I couldn’t see in the dark and knew something was wrong as all my friends could see out in the dark at night.   I have been living with sight loss for 20 years now and have had to make adjustments in my life to assist my living and working with sight loss. At present I have loss of central vision (6/190 in right eye and hand movement only in left eye).  I have total night blindness, colour blindness, and loss of peripheral vision.  I use a sighted guide or a long white mobility cane to navigate my surroundings and environment. I access computers via a screen reader called JAWS. I have voice over software on my mobile phone to enable me to access phone and text messages.

I have been involved in a wide range of sporting activities since 1997.  From 1997 to 2000 I was a member of Saint Sennan’s Athletic Club and was involved in cross country and road running.  In 2001 I took part in the Fighting Blindness Borneo Challenge and reached the summit of Mt. Kinabulu. In 2004 I completed the Dublin City Marathon.  In 2005 I took part in the Fighting Blindness Patagonia Challenge and trekked 100km through Argentina and Chile. I started cycling in 2009.  That year Comeragh Cycling Club decided to add Para-Cycling to their already highly established cycling outfit. The aim of this initiative was to give local people with vision impairments the opportunity to get out on the road and cycle with some of the best cyclists the sunny south-east has to offer.

In September 2012 I was asked by Comeragh CC if I would be interested in trying to qualify for the 2016 Paralympic Games in Rio, Brazil.  I had no idea what would be involved but knew it was an amazing opportunity so I said yes and started training. I had to lose weight straight away as I was about 97kg.  I started going to the gym and was getting out every Sunday for a long spin on the bike.  In May 2013 I attended my first Paracycling Ireland Invacare Time Trial. For the race I used a bike purchased by the Comeragh CC for training purposes and to facilitate Para Cycling members of the club, the bike was never expected to race time trials or progress its rider to victory in such a competitive field. We finished well down the field but it was a great experience as the elite squad that had competed at the 2012 London Paralympic Games were there and I got a great insight into what I needed to do in order to progress through the ranks.

A few weeks later Martin Kirwan (Focus on Fitness) agreed to come on board as a coach and pilot.  Training intensified and I started progressing quickly.  We were travelling all over Ireland racing and I was awarded the White Jersey for the 2013 Best New Rider in the Paracycling Ireland Invacare Time Trial League. Next, we needed to change equipment and try to improve things again. We held a spinathon in City Square, followed it with a night in the Mansion House and along with some company sponsorship we raised enough money to purchase a new bike which cost about €9,000. In 2014 we won the Winners Yellow Jersey for the Paracycling Ireland Invacare Time Trial League and travelled to Prague to race getting some valuable international experience. To fund the 2015 racing season, Martin organised a sponsored cycle,  we cycled from Malin Head to Waterford on the tandem in 13hrs. We had a relay of 5 groups of 2 to keep the tandem going all the time to complete the journey as quick as possible. The plan was to do it in 12hrs but the weather was bad with snow and ice on the road with temp dropping to -4 on the day.

We were runners up in the 2015 Paracycling Ireland Invacare Time Trial League.  That year we also competed in Belgium, Germany, Spain and Prague; however during the season Martin realised we needed a new pilot for the bike so he stepped down and we recruited a new Pilot, Marcin Mizgajski. We finished on the podium in 3rd position in the Prague European Cup which was a massive result. 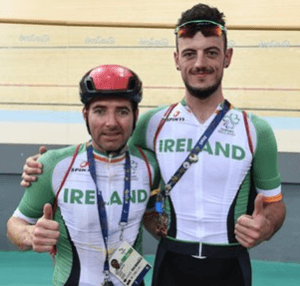 In 2016, a new bike and travel costs were fundraised for at a great night in Kilcohan Park Greyhound Stadium where we had local hurlers, cyclists and runners racing around the dog track.  We won the Winners Yellow Jersey for the Paracycling Ireland Time Trial League for a second time.  We won bronze and silver medals at the National Championships.  We travelled to South Africa, Belgium and Spain to compete in the World Cup Series.  We won gold in the road race and bronze in the Time Trial in South Africa which ranked me at number 1 in the World rankings for the World Cup Series and we wore the World Cup Leaders Jersey at the next event in Belgium.  It was amazing to be ranked number 1 in the world for a few weeks and because our whole focus was on qualifying for Rio I often forget about this achievement and what it took for us to achieve this incredible feat.

Once again in 2017 we won the Winners Yellow Jersey for the Para-Cycling Ireland Invacare Time Trial League.  We won gold and silver at the National Championships.  For the start of the season Ian Ingles was selected as my pilot.  We travelled to Italy Belgium and Holland for the World Cup Series getting top 10 results at each event.  The World Championships were in South Africa and Dermot Radford was selected as my pilot and we finished 11th in the Time Trial.

Onto 2018 and  myself and Dermot will be competing in the Paracycling Ireland Invacare Time Trial League, National Championships. We will be travelling to Belgium, Holland and Canada for the World Cup Series and the World Championships will be in Italy.  We were in Athlone for Round 2 of the Paracycling Ireland Invacare Time Trial League recently and it was good to get back racing and come away with a win.

Since September 2012 my goal has been to qualify for Rio. I had no idea how I was going to get there or what it would take to qualify for the games. I’ve lost 4 stone in weight and train 6 days a week. As the Games got closer training intensified and I was often training twice a day. I’ve had to make sacrifices and it’s been hard missing family events and occasions. It’s been an emotional rollercoaster as for a while it felt that every time we got a result something emerged to knock us back again. When we got news I had qualified it was a bitter sweet moment. It was an amazing sensation realising all the sweat blood and tears had been worth it. 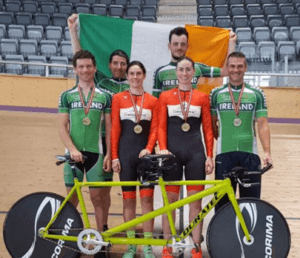 I can say forever that I am a Paralympian and it was such an honour to wear the Irish jersey and do my best in every race I participated in. It was an amazing experience being in the Paralympic Village. There was a great buzz and great interaction between the athletes as we swapped pins with other countries. The food hall seemed as big as a football stadium with every kind of food you could think of. It was great having a card for the vending machines in our apartment building so we never were without bottled water. The sound of the drums at the welcoming ceremony was incredible, and I never tired of hearing it as we passed the plaza. I was disappointed that I couldn’t go to the opening ceremony as we were racing the next day. We got to go to the closing ceremony and the atmosphere was wonderful. It’s still only sinking in what a huge achievement it was to take part in the Paralympic Games.

Qualification for the Tokyo 2020 Paralympic Games starts now and so our journey to be a part of the Games start all over again!!!