Published: July 24, 2018
Whilst your club ensures the players are getting physically active, does your club ensure coaches, parents and committee members are doing the same?
We have just finished piloting two Club on the Move Programmes at Abbeyside/Ballinacourty GAA Club & Dungarvan Rugby Club.
We asked clubs to apply for a pilot initiative which involved the following:-

– 6 week physical activity programme with the focus on increasing physical activity in a fun setting in your club premises/grounds.
– Up to 12 sessions (2 per week) which can take place at times set to suit your members.
– Sessions to cater for a minimum of 10 and maximum of 30 parents, coaches or committee members.
– Height, weight, waist circumference and time to walk/run 1 mile will be taken pre and post programme.
– A subsidy for costs will be available from WSP for this programme.

We were particularly delighted that participants set up an additional third evening a week off their own bat to meet and train.  Due to this success, the club have embarked on a ‘couch to 5km’. Feedback was excellent and the programme was summed up by one of the participants saying  ‘The sessions were great craic. You encouraged us all to give it our best. Everyone who attended had exhausted but happy looks on their faces at the end of each sessions – all having achieved’

Fourteen participants took part in our ‘Club on The Move’ at Dungarvan Rugby Club. the group were a mix of parents, committee members 7 coaches. We were delighted with the results. Physically, there was an average weight loss of 2.05kg  but more importantly 100% of participants saw their waist circumference reduce by an average of 6.5cm.  In week one participants were timed for eight minutes to see how far they could run/walk, the same test was done in week six and every one of the group improved their distance covered with aerobic capacity increasing on average by 46% and an average increase of 420 metres as part of the 8 minute test.

The fun and banter was very telling and the mixture of fun games and Pilates was definitely a formula that worked with one participant stating ‘I found it absolutely fantastic, the best group exercise I have ever done in my life’. We are delighted that the group have organised a further six weeks of physical activity meaning physical activity is becoming part of their weekly routine. The group enjoyed the programme so much that they continued on with twice weekly sessions for further six weeks.

If your club is interested in this programme please contact Peter Jones via email for more details at pjones@waterfordsportspartnership.ie 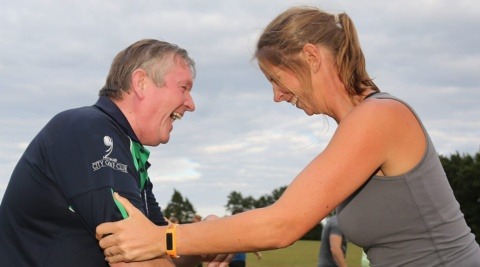 'The sessions are great craic . . . we're all encouraged to give it our best!'