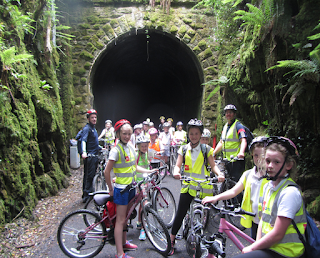 Waterford was no different and in fact, we have a very strong tradition where Bike Week is concerned. In all there were thirty seven events taking place right across Waterford City and County over the course of the week to suit all ages and fitness levels involving 32 groups and 3856 participants. The week is funded by the Department of Transport, Tourism and Sport targeting those new or returning to cycling or those who just want to enjoy a leisurely spin with friends and family

Waterford City Events – Out of the thirty seven events nine were open to the public, with the first event kicking off on Sunday 12th June with the Dawn Cycle. Fifteen eager and enthusiastic cyclists gathered in the RSC as we took a leisurely spin along the newly developed Green Route to Tramore. When we reached Tramore participants were given a well earned light breakfast provided by T-Bay Surf Club who opened up specifically to cater for this event.  On Wednesday 15th June, we had our National Lunch Time Cycle with nearly forty participants using the new bike lanes along Waterford Quays as we completed an 8km cycle to Grannagh and back to the Munster Bar for a light lunch.  On Friday 17th June the RSC was a hive of activity as over four hundred children took part in our annual Cycling Festival which was run by South East Cycles. Schools who took part in the Safe Cycling programme earlier in the year were invited to take part and put their newly learned skills into use as they took on fun obstacle courses and activities.