The Sport Ireland Sean Kelly Tour of Waterford part of the Sport Ireland Cycle Series of five cycling events throughout Ireland in 2017 took place on Saturday 19th & Sunday 20th August and another chapter in the history of this great event was written!
Dungarvan looked resplendent on Saturday morning as over 1200 cyclists from 7 months to 70 years took part in the 12k Kelly Spin. It was a sight to behold as the multitude lined up on the Causeway entertained by Dungarvan Brass Band. Cllr. Pat Nugent, Mayor of Waterford City and County Council officially started the event and counted down the start at 11.30am and a sea of smiling faces  young and not so young moved off from the start line on a route which saw them take in Abbeyside-Ballinroad-Ballinacourty-Gold Coast Road and the Abbeyside section of the Greenway. 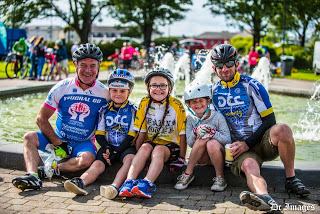 The 12k has now firmly established itself as one of the most enjoyable and uplifting events
over the course of the weekend. The sheer joy and sense of achievement that the children experience as they cross the finish line to the cheers and applause of the crowd is fantastic. There were smiling faces after the event as well as crowds remained in Walton Park to enjoy the food stalls and a picnic, face painting and music. Our event partners, Dungarvan Credit Union were also on hand to give out souvenir medals and other goodies to all of our finishers.
Things were looking ominous for Sunday with rain forecast, and this year we didn’t escape!
The rain moved in just as the 160k cyclists were lining up at the start line, but, the rain did not serve to dampen in any way the spirits of the 3500 participants who took to the roads of the county as part of the tour. The three routes were officially started by Cllr. Pat Nugent, Mayor of Waterford City and County Council and John Treacy, Chief Executive Officer of Sport Ireland. It was a challenging day for cyclists and stewards alike but already as the positive feedback flows in from the participants you get the sense that all the hard work and planning paid off, even if we all got a bit wet! 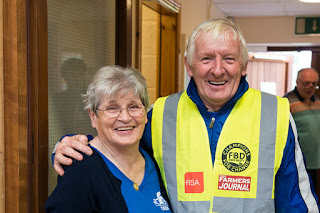 There are so many ingredients that make the Sport Ireland Sean Kelly Tour of Waterford the success it is, but foremost in our minds after such a challenging day is the unique ‘Waterford Welcome’ afforded by all of our volunteers right across the county to all of the cyclists regardless of the weather! Of course there are many, many people to thank and that will be done over the coming days, weeks and months. We recognise that primarily this event would never take place without the goodwill, enthusiasm, dedication and hard work of over 500 volunteers. Take a bow you were all amazing!

Our sponsors have also been so supportive all along and to one and all we are very grateful and they include; Sport Ireland, Flahavan’s, Eurospar, Flynn Hotels, Cycling Ireland, Dungarvan Credit Union and Chia Bia. We would also like to acknowledge the support of Dungarvan Nissan, official supplier of vehicles to the Sean Kelly Tour. Acknowledgement must also go to the professionalism shown by the Gardai, the Civil Defence, the Irish Red Cross, the Order of Malta, Dr. Noelle Quann (event doctor) and all the medical team of volunteers for ensuring that this was both a safe and enjoyable experience for all concerned. A special mention must go to all those who supported the event’s chosen charity, the Solas Cancer Support Centre, by directly raising money, supporting their raffles or by giving of their time to help out over the weekend.

For now let’s just enjoy the moment and reflect with pride on a wonderful weekend in County Waterford’s sporting, social and cultural calendar!